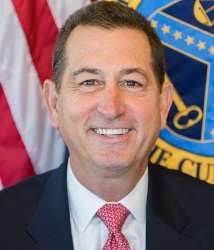 Joseph M. Otting, Comptroller of the Currency, will be our guest speaker at the Exchequer Club luncheon on Wednesday, October 17, 2018.

Mr. Otting previously was President, Chief Executive Officer, and a member of the Board of Directors of OneWest Bank, N.A. Prior to joining OneWest Bank, he served as Vice Chairman of U.S. Bancorp, where he managed the Commercial Banking Group and served on the Bancorp’s executive management committee. He also served as a member of U.S. Bank’s main subsidiary banks’ Board of Directors.

From 1994 to 2001, Mr. Otting was with Union Bank of California, where he was Executive Vice President and Group Head of Commercial Banking. Before joining Union Bank, he was with Bank of America and held positions in branch management, preferred banking, and commercial lending.

Mr. Otting holds a bachelor of arts in management from the University of Northern Iowa and is a graduate of the School of Credit and Financial Management, which was held at Dartmouth College in Hanover, New Hampshire.